Victoria Moran is a vegan with a voice.

Before becoming vegan she was a vegetarian.  As a vegetarian she thought she was keeping animals from being slaughtered.  But she learned otherwise.  That didn’t sit well with her.  Victoria became a vegan decades ago.

In fact she was named sexiest vegan over 50 by PETA (People for the Ethical Treatment of Animals.)

She also has strong convictions of how she wants to live her life.

“I may just have to do something for somebody else, for a stranger. I just know that I don’t want to continue in my life or certainly leave this life with some of these stones unturned.”

One of those stones was to get out into the world where she could change peoples lives.  And work with other vegans.  Paul McCartney is one of those vegans.  Her first encounter with him began with a cigarette butt.

She is a certified holistic health counselor (HHC, AADP).  Furthermore she is the founder and director of Main Street Vegan Academy.  This is the place where you can receive training and certification as a vegan lifestyle coach.

Her convictions are strong and her voice is passionate.

She is living a charmed life which is also her best selling book.

Victoria’s recipe for a charmed life may be heard on this episode.

Listen to other Your Positive Imprint episodes. https://yourpositiveimprint.com/episodes/ 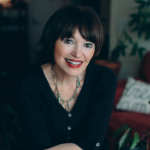 This page is where you can find Your Positive Imprint episodes that have been launched.  You get the show notes but also the bonus information that is not found anywhere but here.  This bonus information might include photographs, quotes, links, etc. regarding the person(s) featured on each episode.