I Didn’t Want to Audition for Britain’s Got Talent

I didn’t really want to do Britain’s Got Talent.  I did not have the courage to get up and sing in front of Simon Cowell. No way!

Well, I ultimately went on the show.

The song the producers and I decided on was Everybody Hurts.

When I finished the song there was a pause for about 3 or 4 seconds. I was thinking Okay.  I walk off the stage and forget this ever happened!

There was just silence.

Singing the song I wasn’t nervous but afterwards I began to shake with just nerves.

Hallelujah was a big hit.  When I look back at Hallelujah I didn’t think I was doing anything great because what I was doing I love doing. It certainly wasn’t the first wedding I sang at.

But the volume of emails and letters that came in after the Hallelujah experience was not something I was expecting. After Britain’s Got Talent  when I sang Everybody Hurts I received more and more emails.

An email that still sticks with me because I remember shaking after I read it is from a woman.  Now I don’t know what part of the world she’s in but she said she had been suffering from chronic pain for years.

She said, “I had my suicide letter written but then I heard you…”

That made me think, oh my God. What is going on here? This is all beyond me really.

We only get one journey and we have to do the best we can.

Listen to Father Ray Kelly as he tells about his experiences on Part II.

Here is a link to my Blog to learn more about Father Ray Kelly. 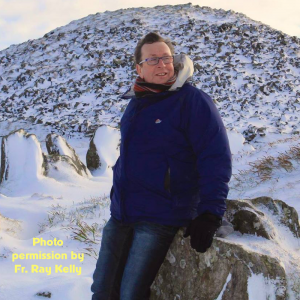 This page is where you can find Your Positive Imprint episodes that have been launched.

You can listen right here on the website or from ANY podcast platform such as Apple Podcast, Stitcher, Google Podcast, Spotify, Pod Bean, TuneIn   or anywhere else that podcasts are available.

Just hit PLAY and don’t forget to SHARE the episodes!

Share directly to Facebook, Instagram, LinkedIn,or the down arrow is to download an episode.  You can also use the COPY button to copy and then paste in an email or a text.  Thank you for sharing episodes.

To leave feedback, click on the picture of the episode and then scroll down.  Or email me feedback.

Your Positive Imprint.  What’s YOUR P.I.?